Dan Keplinger AKA King Gimp In The Press

Dan Keplinger AKA King Gimp In The Press 


December 3,
Crippingupsex We have Oscar Award winning documentary filmmaker, King Gimp, @DankKingGimp and his wife, Dena, In Bed with Eva! We talk about painting, being in an interabled relationship, and more! Read the whole ChatCast. 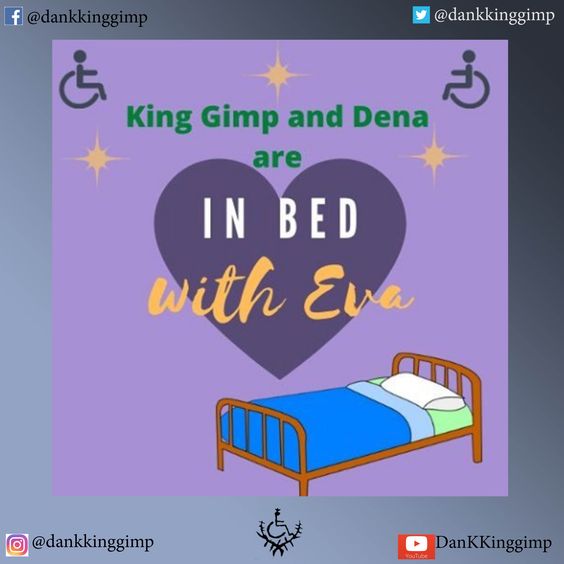 Susan Isaacs interviews Dan Keplinger, her former student and the subject and co-creator of the film "King Gimp," which observes Dan's life as an artist with Cerebral Palsy. Susan reflects on the curation of “Public/Private Conversations," (a current exhibition of Dan's work) and follows up with a Q&A with Dan. Read on to hear how he feels about being a documentary film star!

Author’s Preface: I have known Dan for about 15 years. He took several art history classes with me as an undergraduate and graduate student at Towson University; as curator of the Holtzman MFA Gallery, I also worked closely with him on his 2007 MFA exhibition. He wrote his papers for me using his headpiece, typing out the words, one letter at a time. Dan’s impact on students demonstrates his perseverance and his leadership. There were several MFA students in a graduate seminar I was teaching, and Dan was one of them. The first night of class, everyone introduced themselves. Dan does not use an AAC (Augmentative and Alternative Communication) device, so you must listen very carefully to him speak. This is important as he believes that a voice translator removes his humanity.

Since I knew him as an undergraduate, I had become accustomed to listening to him, and I was able to help the class understand him when students had questions. Three students for whom English was a second language came up to me after class to talk. They said that they were thinking of dropping the course since it was so much reading and writing and discussion and oral presentations and it would be very difficult for them; but after meeting Dan, they decided to stay. The comment that has remained with me all these years is, “If he can do it, then we can too.” And they did stay with the course, and they all, including Dan, did very well. 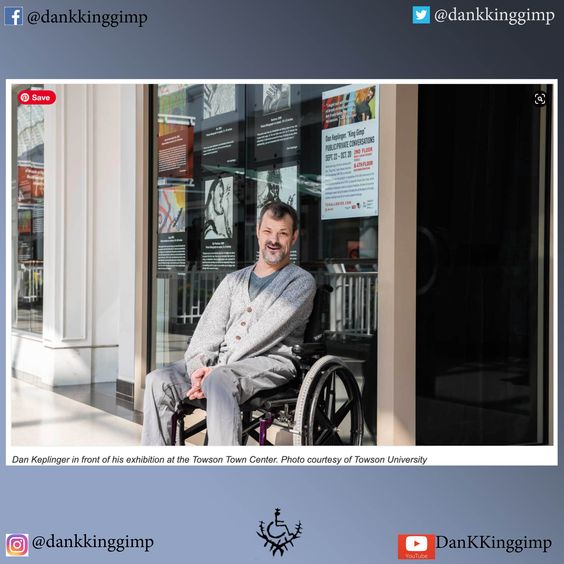 It’s been 20 years since the Oscar-winning short documentary “King Gimp” thrust Dan Keplinger ’98, ’07 into the spotlight. Written by Keplinger, who has cerebral palsy, and distributed by HBO, the short film follows the artist’s life from age 13 to his graduation from Towson University.

In the film, Keplinger discovers a passion for art as a student at Parkville High School — where he began painting and drawing with a paintbrush attached to a headpiece — and continues that passion at TU. “Art gave me a way to express myself without anyone interpreting for me,” he says in the film.

Two decades later, the artist and disability rights activist has exhibited and spoken around the globe, including multiple solo shows at the Phyllis Kind Gallery in New York City. He received his MFA in studio art with a scholarship from TU in 2007.

This fall, on the 20th anniversary of the film and the 30th anniversary of the passing of the Americans with Disabilities Act (ADA), Keplinger returns to Towson for a retrospective of his work. The Department of Art + Design, Art History, Art Education presents “Public/Private Conversations,” an exhibition of Keplinger’s work curated by J. Susan Isaacs. Originally scheduled for April 2020, the exhibition has been rescheduled for Sept. 22–Oct. 20 at Towson Town Center. 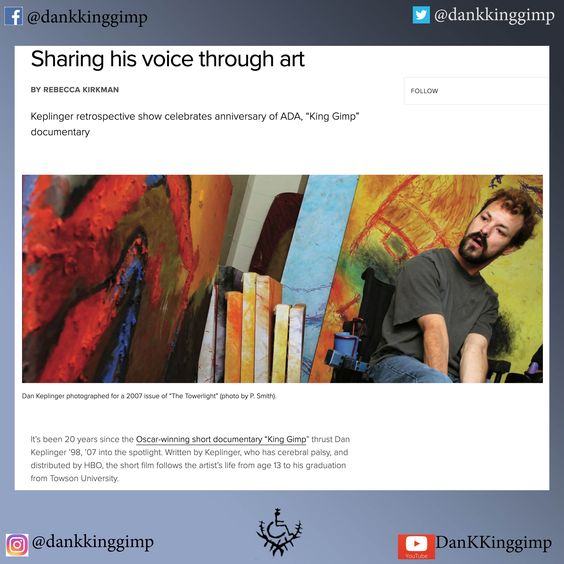 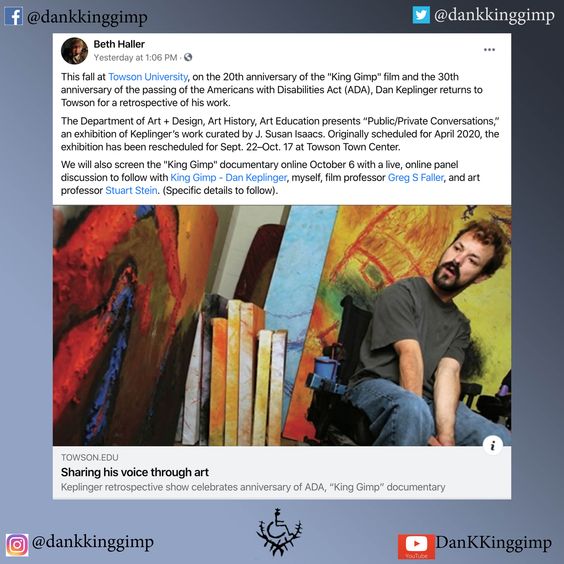 As our artists and staff have carried on with studio life during this most unusual Make Studio summer, our founders and Board recently finalized our phased plan for both reopening our physical studio and improving virtual services for the long haul

ALWAYS IN HIGH DEMAND: LIFE, LAUGHTER, AND ART. http://ow.ly/Bkkm30r0gNh As our artists and staff have carried on with studio life during this most unusual Make Studio summer, our founders and Board recently finalized our phased plan for both reopening our physical studio and improving virtual services for the long haul. Kicking this off last week was a visit from long-time Make Studio friends, artist Dan Keplinger (aka King Gimp) and his partner Dena, planned in-tandem to #ADA30 celebrations. 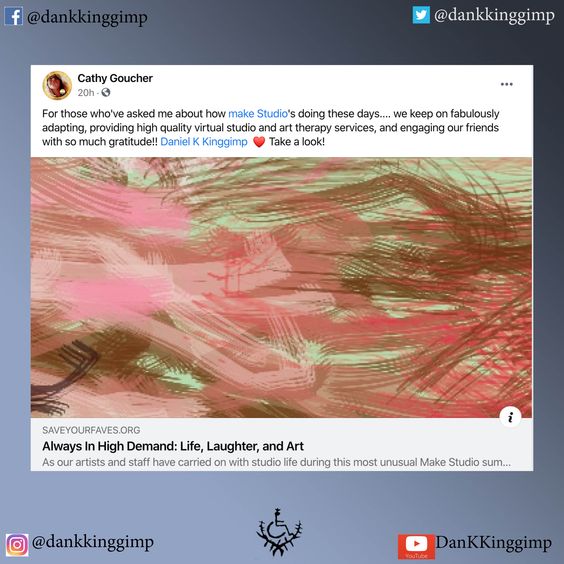 July 23,
THE EVOLUTION OF DISABILITY IN FILM: AFTER THE ACCOLADES, THE WORK CONTINUES (Some shameless publicity hahahaha)

Once upon a time, disability was just a diagnosis. Through time, the word has evolved to encompass larger more expansive concepts like community, identity, and culture. In 2020—thirty years after passage of the Americans with Disabilities Act—anyone who still thinks of disability solely as a medical issue might not realize it but they’re also increasingly signaling to the world at large that they’re behind the times not just in theory but arguably by several decades.

Culturally, for a variety of reasons, both experiences and depictions of disability are receiving renewed interest and increased attention. Cinematically speaking, the complicated, messy, ever-changing relationship that viewers and creators have had with disability continues—quite literally—to play out before our very eyes.

Before we can truly move forward, let us pause a moment to glance back. 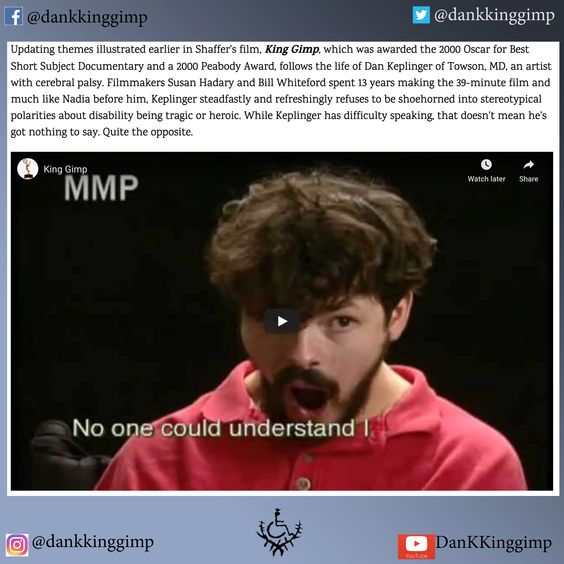