When Passion Needs to Be Seen

I am someone how has more respect for the constitution and the amendments then I do the flag and I know that is a contradiction. When I look at the flag, it is a symbol of unity, equality and everybody as one, but I have never seen the country in that light. Ever since I have been 18, I have voted because that is my job in return for the rights that people have given with their lives. Also, the men and women who served and now live their daily lifes with the nightmares from what they experienced.

It is also my job to speak up when seen an injustice taking place and I have done that since being a little boy. That is why I respect the constitutional amendments more, because the amendments let us be seen as individuals and that is the reason why people are just pissed off. Our leaders are not listening to the people they serve and the boil is about to pop. The problem is actions can drown out the message, especially when passion takes over. The bigger picture is there needs to be a conversation that we live in a country that we all are not treated equally and the divide is growing every day.

If our leaders are going stick their heads deeper in the sand, then it will take a tornado to unburied their heads. I am a that guy who can go talk with a CEO and left the office with their jaws on the floor using my words as weapons. The other end of the spectrum is acting as a lunatic when seeing someone parked in disability space just to drop off at a red box. I have blocked them in the space screaming my head off to make my point. So, I do what I need to get my message across.
Posted by Dan K Kinggimp at 8:54 AM No comments:

I am very happy to see J.J. and family back for season number 2, something that most shows have not done when a character with a disability is the focus.  This might be a show that you are more drawn to, because one can relate to the different characters.  I relate to J.J. because I have been through that experience, other people can relate to the parents and others might be in the shoes of Kenneth.

I have talk to friends that think the show should be more edgier I know Speechless is rolling a fine line. It is under the eye of many groups, the two big one is those with disabilities and those without.  something that may be gimp humor to us, could turn off a lot of people.

I would like to see this show keep its humor, because if I did not see the humor in life things would get very depressing for sure.  In Sophomore year of high school student start thinking about college and if they want to go out of their home state. I think issues as this should brought into the show. This would be more complex for J..J. due to his disability. A few weeks ago, I had the thought of what if, the Medicaid fight popped up in the show, it could affect the support they got in school and at home?  Although it would strike a chord with the disabled community, others could see it as not the right platform for the issue.

The Key to the show is to keep it topical, but funny in order to keep its appeal to the masses and that is a monumental task in these times.
Posted by Dan K Kinggimp at 10:55 AM No comments:

Our Country is Going Backwards Not Progressing

Protests fill Senate hallways as Cassidy-Graham gets its hearing

I know this is a bit late, but this is just another sign the of how President and other government leaders are not listening to the people they serve. I think the members of the #NFL that are protesting peacefully are brave, because they but their jobs on the line to start a conversations that are long over due. Veterans should be more made at the VA systems, because is sucks.

Just because the fight for #medicaid is over for now, does not mean white flaps are being waved. In fact the war is just regroup it's troops. The #ADA is also on the autopsy table, the "business President" wants to undo the civil rights of People With #disabilities, so business owners will not need to make expensive accommodations for us! Our country is going backwards not progressing.

Posted by Dan K Kinggimp at 8:25 AM No comments: 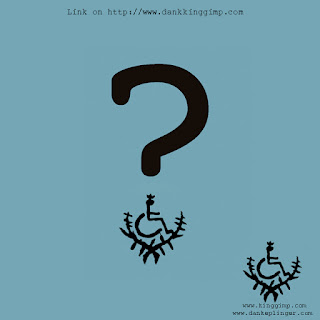 Yesterday we were out doing some every day task and the Gimp Mobile shut down, we think it was a dead battery. So, we are in a super market parking lot half way sticking out in the isle. I am telling Wifey just to start asking people if they mind giving us a hot shot. You would think some guy would at least ask if they could help seeing that the van’s hood was open, but no. It was a group of 6 women that tried to help us. Even thou we could not get the van started, they offered to drive us back home since we only live two miles away, but Wifey already called our road side assistances and we did not want to miss them.
The guy came and decided the van should be towed, but nobody could be in the van while being towed and he only could let one person ride with him. His truck had a bench seat, so all three of us could have fit in there. I was in my power chair and did not feel like causing more stress, I just rolled home of course Wifey hated that idea. It was a rainy day and she didn’t know if the route was safe. I really did not say anything to the guy, because I would have gone gimp on him.
When the guy drops off the van at our place he parked the van 2 feet from the curb, Wifey said please move it closer so people will not hit it. His reply was you have insurance so don’t worry about it. Insurance does not cover accessibility and what they would pay would not even pay for half of the modifications if something would happen to our van.
Here is this “guy” that is suppose to be helpful and relieve some stress is doing the opposite. By letting a disabled man walk home in the rain and did a drunk parking job and putting our van at risk, because he wanted to get his job done.
Posted by Dan K Kinggimp at 7:24 AM No comments: